My First New Site is Live - WezM.net by Wesley Moore 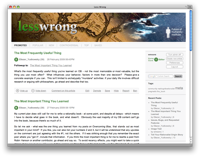 Since starting my new job at Tricycle Developments (now TrikeApps) in January I’ve been working on a project to repurpose the Reddit source code into a kind of community blogging platform with voting and karma.

The result of that work went live on Thursday and after an initial hiccup with a questionably named user posting off topic content its going well so far. One of the first posts on the site is one asking for feedback on Issues, Bugs, and Requested Features. The thread has been inundated with all three of these so it looks like I still have plenty of work ahead refining the user experience.

As well as being the first site I’ve worked on from start to finish (aside from personal ones) Less Wrong is also my first Python project and significant open source project. It’s been great learning another programming language and putting that knowledge into practice. You can check out the code on GitHub (pun not intended). Also if you end up looking at or using the code or Less Wrong itself and encounter any issues there is an issue tracker on Google Code where they can be logged.