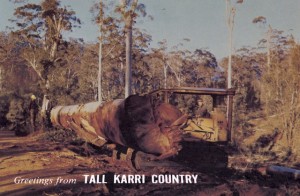 I was sorting through some old postcards that I bought during the trip around Australia my family did in 1992. Amongst them was this particular one. Now that I’m not twelve and obsessed by tractors and earth moving equipment it seemed quite bizarre. The caption on the back reads:

Pemberton is in the southern part of Western Australia that features the Karri forests. According to Wikipedia Karri trees can grow up to 90m tall, making them amongst the tallest trees in the world. The photo seems like such a strange image to put on a post card. I can’t imagine writing home to family telling them about the beautiful Karri forests on a card that depicts them being destroyed.