iPhone 3G One Week In - WezM.net by Wesley Moore

A friend asked the following today, the reply was big enough I decided to post it:

So Wes, you’ve had your iPhone for a week now - what are your initial comments?

Has it changed your life? Has the battery life been crappy for you? Talk time OK?

Its definitely the best phone I’ve had. Part of that is due to the tight integration with Mac OS X, which obviously very few companies were going to pull off. As a device it’s brilliant to use and full of functionality. I’m loving the apps and decent browser. The WiFi is really nice at home. The iPod part obviously works as well and better than any prior iPod.

The on screen keyboard is pretty much as described. You have to give it time to get the hang of it and you have to trust it. If you’re typing a word that would be in the English dictionary you’re best to keep on typing even if the word is way off. By the time you get to pressing space it’s usually selected the right word, which is selected automatically upon space. Two irritations with typing though. Its less likely to get shorter word right, particularly when there’s multiple valid options. There’s no way that I’m aware of to get a list of possibilities and choose the one you want. Of course being a small word means it’s not hard to fix and if you type it correctly in the first place then it isn’t a problem at all. The other minor annoyance is when you get to the last word in a sentence that is mis-typed with a correct suggestion it appears the only way to accept it is to press space (and then delete the space) or grab a full stop. 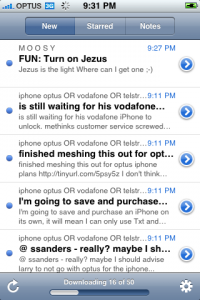 I haven’t missed MMS at all, especially with a decent email client built in that can talk to Gmail via IMAP and send photos to Flickr that way.

I have missed Todo functionality. I have no idea why Apple have not got this syncing. The support is there in iSync and todos sync with my old phone (Nokia 6280) just fine. I’m hoping that it’s one of these things that will make it eventually. There’s two reasons I miss todo, one to track things to be done, the other is for reminders for things that don’t have a duration (which can be put in as calendar entries). There is no way to do reminders without a duration at the moment. Having said that the calendar functionality is comprehensive. It supports multiple calendars, full editing, meeting acceptance and basically anything you can do on the desktop. 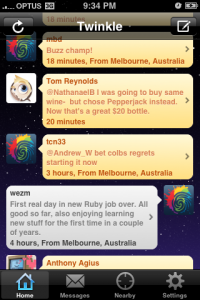 Another annoyance surrounds SMS. When on silent you only get a single vibration on new message, which is easily missed. My old phone did three, which was better. Also when you get an SMS my old phone would show an envelope on the black and white standby screen. With the iPhone you have to wake it up to see if you’ve got a message after the display goes back off.

The AppStore is great, some of the apps are very well done. I’m really liking Byline, Twinkle, Exposure and MoPhoTo. I’m not much of a Facebook user but the Facebook app is very well done. It’s just the core parts of Facebook without all the crap. Of those five, three are free, one is free by ad-supported (with a pay for version available) and the other AU$12.99. I think that’s a pretty good spread for some top quality apps. Some screenshots of these apps are scattered below. 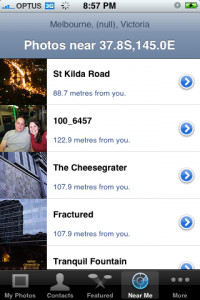 Battery life is nothing brilliant as has been reported elsewhere. You’d probably want to change it every day. Today I watched a video podcast on the way to work, send a couple of SMSs during the day, added a calendar event, got a call from Steve, called the dentist, listened to music, read in Google Reader via the Byline app, read and updated Twitter via the Twinkle app and used the timer to cook dinner and it’s showing half battery. It was off the changer all last night too.

A complaint of the old one was that the ringer and message volume was very low and easily missed. I’ve it plenty loud enough and it’s only on about three quarters. Speaking on the phone the volume is good, although I haven’t tried extreme environments like a club.

One of the best built-in apps on the whole phone is maps. Whenever you want to find something, or get the details for a business, get directions, just bring up Maps and it will sort it out. Its as good as, if not better than Google Maps on the desktop. It has the same three views too: Maps, Satellite and Hybrid. The location awareness is great and there’s some basic uses of it in the apps so far, hopefully more creative uses come out. One interesting one is an app called Exposure that is a Flickr client with a ‘near me’ function. It shows photos near your current location. Doing so at home brings ups photos of St Kilda Rd, the fountain in the gardens out the front (Pictured above).

Maybe I’m easily sold on such things but the UI is truly beautiful and being solely finger driven is revolutionary (on a phone). I’m a happy customer. 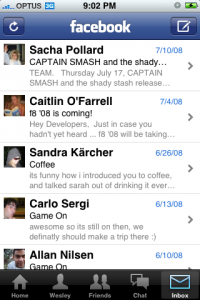 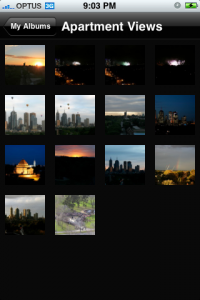