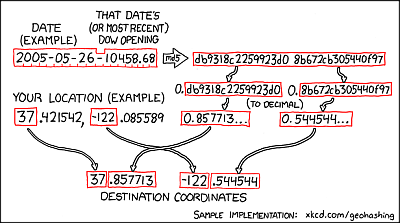 Randall Munroe proposed the awesomely geeky idea of geohashing via the xkcd comic and blag recently. The idea basically involves using the MD5 hash of a date combined with the opening value of the Dow Jones Index for that date to derive a latitude and longitude relative to a (generally your own) location.

However there is a problem for those of us residing in Australia (and other locations with a time zone significantly different from EST). With the Dow Jones Index operating on US time its not possible to determine a geohashed location in Australia until about 23:00 AEST for a given date. No doubt others have thought of this but I suggest we use the All Ordinaries Index instead. With that out of the way we just need some enterprising sole with some spare time to implement a version of the map based on this.

Update: More info on geohashing in Melbourne on the Visible Procrastinations blog.

Another Update: Using the Dow on the weekend works well though. As over the weekend everyone is more or less synced to the same index.

Final Update: The xkcd blag has a follow up article that clarifies the behaviour for Europe, Asia and Australia. It boils down to using the previous day’s Dow Jones Index.